Robert (b 1868) was the fifth child of George Rawson and Mary Hercliff. In 1891 he married Ellen Smith in Walhalla. They had three children.

The remaining material on this page about the family was supplied by Pat Batchelor, and it comprises extracts from a family history she is preparing to be called "Family Fragments".

Irene Ellen Rawson (the first child) was born in 1892 in Walhalla and she died in January 1962 in Prahran, Victoria. She did not marry. On 4 March, 1953 she was awarded the MBE by Elizabeth II for 33 years service at Kew Cottages, where she was the Charge Nurse. She was known as "Renee".

William (Bill) John Rawson (the second child) was born in 1894 at Walhalla, and he died in September 1957. He married Caroline Rogers on Christmas Eve 1936 at the All Saints Church, East St. Kilda. A photo from their wedding day is below. There were no children from this marriage. Bill worked at Robinson Process Engravers, Latrobe Street, Melbourne, as a typesetter. His father, Robert (b 1868), who was a timber worker and gold miner, built a house at 6 Woodville Avenue, Glenhuntly. This house was eventually left to Caroline who sold it in about 1970 to go into a retirement unit. Bill and Caroline owned 3 acres at Launching Place, and had a small house on the land, known as "The Shack".

Roy Robert Rawson (the third child) was born in 1898 at Woods Point and he died in 1971 at Hawthorn. He married Florence (Flo) Elizabeth Mitchell, who was a school teacher as well as the owner of a children's ware shop in Bourke Road, Camberwell.

Their only child was Donald William Rawson, who was to become a noted historian and political scientist. Roy studied Esperanto, an international language, and was supposed to have been the first person to speak it on the radio. He used to live at West Gully Road, Upwey. He was a member of the Australian Labor Party, vice-president of the Upwey branch and MLC, Southern Electorate from 1952 to 1958. Roy owned a bookshop at 169 Exhibition Street, Melbourne and, among other things, was in the Australian Council for Civil Liberties. A copy of a letter from Roy to the Commonwealth Attorney-General about book importation is here. Roy meeting the Queen at the Victorian Parliament in 1954.
Source: Parliamentary Library.

"The Queen visited parliament twice on her 1954 visit. The first time on 24 February 1954 after having arrived at Essendon airport. She met parliamentarians briefly in Queens Hall. The following day Her Majesty opened the second session of the 39th Victorian Parliament at 2.30 then retired to the parliamentary gardens for a garden party." 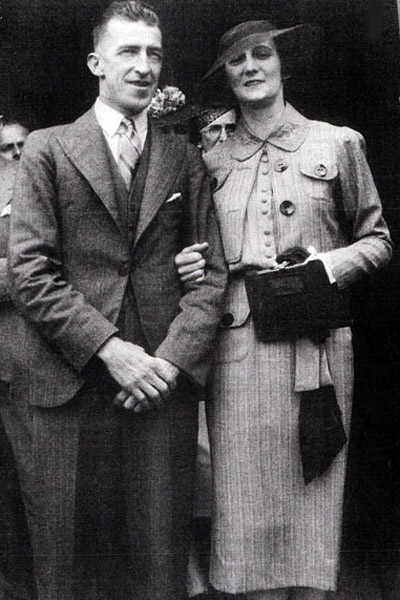